It is October 2017 and the stock market is at an all-time high. Tensions are building. Valuations are stretched. “It can’t go much higher, right? When is the party going to end? How far will stocks fall once it does?” I get these questions all the time.

My answer: I don’t know and I don’t care.

The reality is, there is a crash coming folks. Could be a month from now, a year from now or five years from now, but big market declines are a natural part of our economy. And just like a blinding blizzard in Chicago, it shouldn’t come as a complete shock when it inevitably does occur.

What we all need to do is toughen up and change our mindset about the stock market. When it goes down (which it will do) we need to look at it as an opportunity, not a tragedy. The reason it makes sense to think this way is because the market always goes up over the long run. This playbook has stated that fact many times, but I have never told you the “why” behind it.

Why The Market Always Goes Up Over Time

One big reason the stock market will always climb higher is because humans and the companies they work for continue to adapt and become more efficient due to exponential advancements in technology and growth of the population. Thus, companies, and therefore economies, produce more and grow over time.

Another, lesser known reason? Because the market is self-cleansing. What do I mean by that?

Let’s take the S&P 500 index for example. Plenty of stocks in the S&P 500 fall off the index by either going to zero (worst case) or by becoming delisted if a company falls below a certain size. But because of the seamless replacement of the fallen and the unlimited upside of a company’s stock price (could increase 100%, 1,000%, 10,000%), the market will always have an upward bias.

Guess how many of these companies are still in the Dow Jones Index.

And despite losing nearly all of its original members, this is what the Dow Jones has done since 1900. 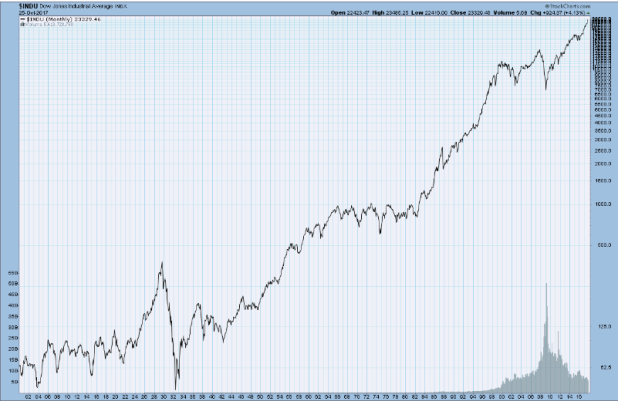 Sure, there have been plenty of speed bumps along the way, some substantial, but the market has continued its relentless march upward regardless of the challenges it has faced.

A Valuable Lesson From Warren Buffett

At 79 years old, during the global financial crisis, Warren Buffett lost over $11 billion by the time the stock market hit bottom in March of 2009. What Mr. Buffett understood, and what most failed to realize, is that he only lost $11 billion on paper and would only actually lose that money if he panicked and sold his investments. In reality, the man didn’t lose a dime.

What did he do instead? He simply continued to invest while everyone else was headed for the exits. He saw that stocks were available at bargain basement prices during the recession, with some more than 75% off. “The stock market is the only store I know of where people get upset when everything goes on sale.” Buffett has said.

His net worth has skyrocketed since then because he did not panic, knew the market would eventually recover and continued to buy when stock prices were low.

Is This The Top?

I know people are nervous that the market is at record highs. But once you change your mindset, you will be able to ignore it and get back to your life.

While it is simple, it is by no means easy. When the market falls, it will be scary. You will hear news outlets claim the world is ending (like they did during each World War and our most recent financial crisis). You will see the fear in people’s eyes as their paper net worth statements fall with no end seemingly in sight.

But if you toughen up and continue to invest your savings automatically in low-cost index funds through the ups and downs of the market, you will become wealthy. It is the key to investing.

Because no, this isn’t the top. 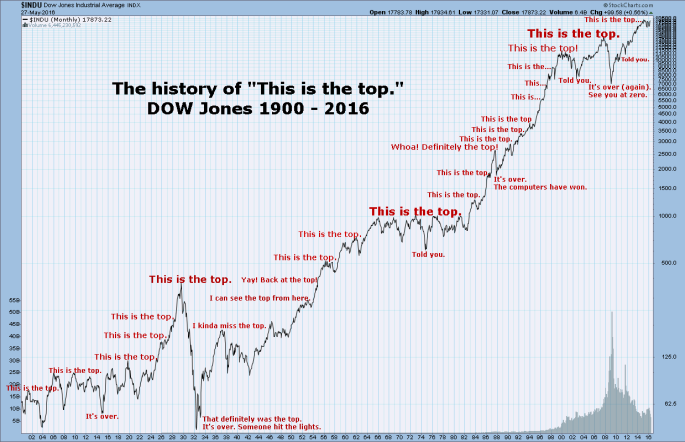 One thought on “Is This The Top?”